The 400/220/110 kV Ołtarzew station - the first completed investment in the strategic project: the Power interconnection between Poland and Lithuania

Print The 400/220/110 kV Ołtarzew station - the first completed investment in the strategic project: the Power interconnection between Poland and Lithuania

The 400/220/110 kV Ołtarzew station - the first completed investment in the strategic project: the Power interconnection between Poland and Lithuania
The opening ceremony of the Oltarzew substation, with the participation of Janusz Piechociński - Deputy Prime Minister and Minister of Economy, the Board of the PSE, and representatives of institutions involved in the investments, was held on 24 April 2014 at a station in the village of Pogroszew near Ożarów Mazowiecki.

The 400/220/110 kV Ołtarzew station is the most modern station currently operating in the Polish electricity transmission system. It was built under the electricity bridge between Poland and Lithuania project, co-financed by the European Union.

Transformation of the voltage 400kV to voltage 220kV and 110kV is carried out at the station.

SE Oltarzew, along with the transmission lines introduced to it, created a new node, which allowed for connection of the existing power stations in Mazovia (stations of Mory, Piaseczno, Towarowa, Mościska and Miłosna) with each other and with the Bełchatów and Pątnów power plants, as well as the lower voltages distribution network, increasing security, reliability and security of supply. 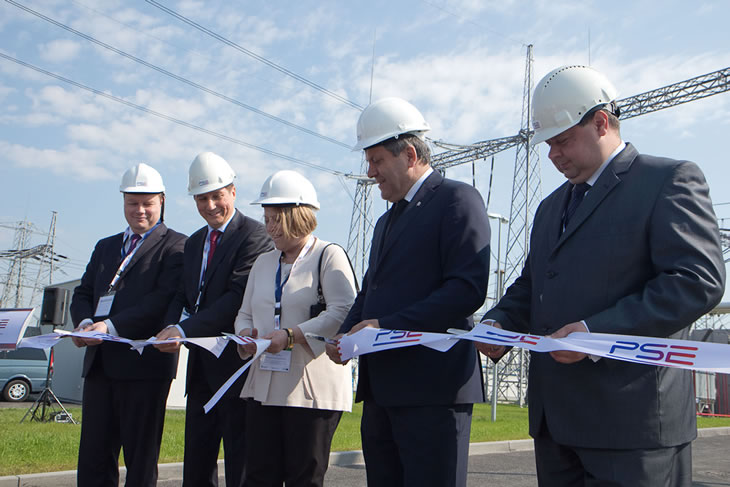 The Oltarzew station is an important element of the power ring supplying the Warsaw agglomeration, which will ensure the energy security of the capital and the surrounding communities. - emphasizes Henryk Majchrzak, CEO of PSE. As part of the whole Poland-Lithuania Project strengthening and expansion of the national transmission grid in the central and north-eastern Poland, which will improve the quality and reliability of supply of electricity to consumers in the area, will take place. Also the attractiveness of these regions of the country for investors, whose business requires the stability of the power supply, will increase. Such guarantee is provided by a modern energy infrastructure – adds the CEO Majchrzak.

The Oltarzew station was built in the GIS (Gas Insulated Substation) technology, where the SF6 gas is used as an isolation. It is a station with no fixed operating support, and control is remote, inter alia, from the level of KDM and ODM, and the technology building in the station. 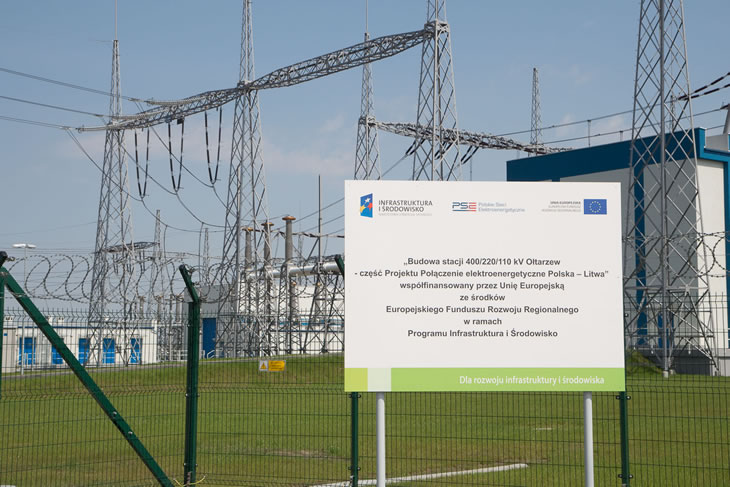 The total investment cost associated with the construction and equipment of the station is about  PLN 181 million net, of which funding represents approximately 55% of eligible expenditure, i.e., about PLN 93, 92 million.

The construction of the PSE station was entrusted to - as a result of the public tender procedures – the PBE ELBUD in Katowice Sp. z o.o.

As part of the construction of the Poland – Lithuania power interconnection, in the perspective of the year 2015, the Polish side implements 11 investment projects: 4 400 kV power lines and 7 substations.

The total value of all investments included in the Poland – Lithuania power interconnection is about PLN 1.8 billion.

The aim of the project is a combination of the European market and the electricity markets of the Baltic States (Lithuania, Latvia and Estonia ) by closing the so-called Baltic Ring.

In terms of domestic dimension, implementation of the Project will simultaneously contribute to the improvement of the work of the National Power System and an increase in the transfer capacity of the cross-border interconnectors.

The Poland - Lithuania Project is co-financed by the Operational Programme Infrastructure and Environment 2007-2013, within the Priority X Energy security, including diversification of energy sources, Measure 10.1. The development of transmission systems for electricity, natural gas and crude oil, and the construction and reconstruction of natural gas storage facilities.