This second update presents the key findings of detailed analyses, which have a preliminary character subject to new facts, which will emerge in the still ongoing investigation.

The analysed sequence of events concludes that the initial event was the tripping of a 400 kV busbar coupler in the substation Ernestinovo (Croatia) by overcurrent protection at 14:04:25.9. This resulted in a decoupling of the two busbars in the Ernestinovo substation, which in turn separated north-west and south-east electric power flows in this substation. As shown in Figure 1 below, north-west bound lines which remained connected to one busbar, connect Ernestinovo to Zerjavinec (Croatia) and Pecs (Hungary), while south-east bound lines which remained connected to another busbar, connect Ernestinovo to Ugljevik (Bosnia-Herzegovina) and Sremska Mitrovica (Serbia).

The separation of flows in the Ernestinovo substation, lead to the shifting of electric power flows to neighbouring lines which were subsequently overloaded. At 14:04:48.9, the line Subotica – Novi Sad (Serbia) tripped due to overcurrent protection. This was followed by the further tripping of lines due to distance protection, as shown in Figure 2, below, leading eventually to the system separation into two parts at 14:05:08.6.

The route where the two parts of the Continental Europe Synchronous Area were separated is shown in Figure 3 below: Due to the low frequency in the North-West Area, contracted interruptible services in France and Italy (in total around 1.7 GW) were disconnected in order to reduce the frequency deviation. These services are provided by large customers who are contracted by the respective Transmission System Operators (TSOs) to be disconnected if frequency drops under a certain threshold. In addition, 420 MW and 60 MW of supportive power were automatically activated from the Nordic and Great Britain synchronous areas respectively. These countermeasures ensured that already at 14:09 CET the frequency deviation from the nominal value of 50 Hz was reduced to around ‑0.1 Hz in the North-West area (Figure 4).

In order to reduce the high frequency in the South-East Area, automatic and manual countermeasures were activated, including the reduction of generation output (Eg. automatic disconnection of a 975 MW generator in Turkey at 14:04:57). As a consequence, the frequency in the South-East Area returned to 50.2 Hz at 14:29 CET and remained within control limits (49.8 and 50.2 Hz) until the resynchronisation of the two separated areas took place at 15:07:31.6 CET.

Between 14:30 CET and 15:06 CET the frequency in the South-East area was fluctuating between 49.9 Hz and 50.2 Hz due to the rather small size of the South-East Area where also several production units were disconnected (Figure 5). During this period, the frequency in the North-West Area fluctuated far less and remained close to the nominal value, due to the rather large size of the North-West Area. This frequency behaviour is a subject of further detailed investigation. 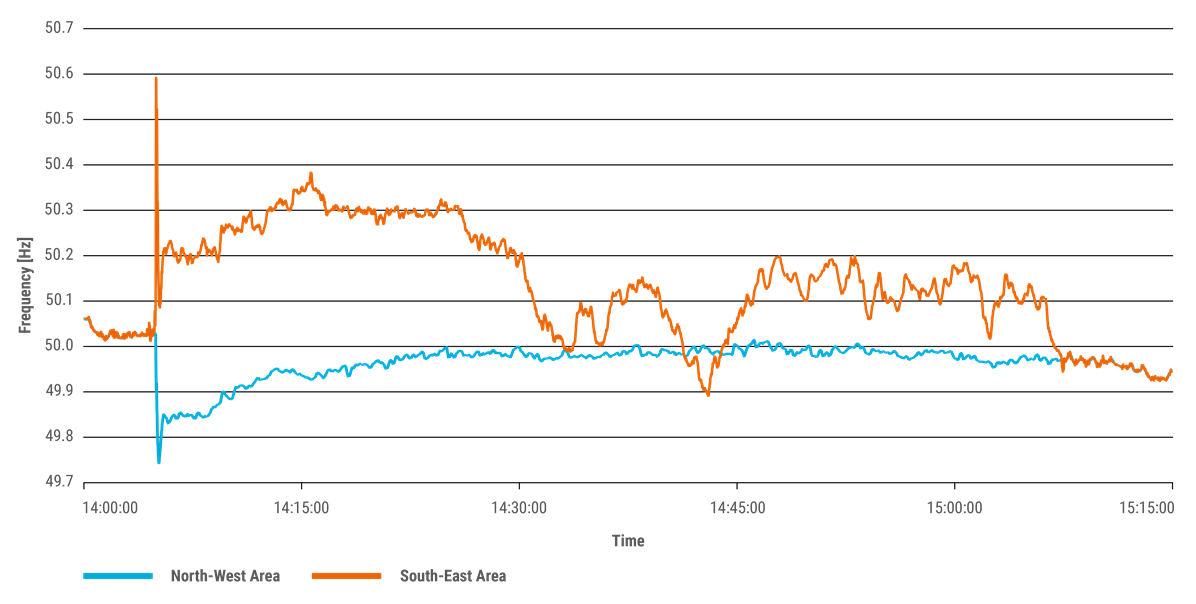 The automatic response and the coordinated actions taken by the TSOs in Continental Europe ensured that the situation was quickly restored close to normal operation. The contracted interruptible services in Italy and in France were reconnected at 14:47 CET and 14:48 CET respectively prior to the resynchronisation of the North-West and South-East areas at 15:08 CET.

ENTSO-E continues to keep the European Commission and the Electricity Coordination Group, composed of representatives of Member States, informed and updated with detailed results of the preliminary technical analyses.

Based on the preliminary technical analyses presented above, a formal investigation following the legal framework under the Commission Regulation (EU) 2017/1485 of 2 August 2017 (System Operation Guideline) will be established, whereby National Regulatory Authorities and ACER are invited to join with TSOs in an Expert Investigation Panel.

In line with the provisions of the mentioned Commission Regulation (EU) 2017/1485 of 2 August 2017, ENTSO-E will present the results of the investigation to the Electricity Coordination Group and will subsequently publish a report once the analysis is completed.

Note: All figures and details about the sequence of the events are still subject to final investigation and possible changes.

What is a system separation?

Is this the first time such an event happens in Continental Europe?

The Continental Europe synchronous area is one of the largest interconnected synchronous electricity systems in the world in terms of its size and number of supplied customers. Such a kind of event can happen in any electric power system. System resilience and preparedness of system operators in charge have a decisive impact on the consequences of such events. A separation of the synchronous area with a much larger disturbance and impacts on customers took place in Continental Europe on the 4 November 2006. This event was extensively analysed and led to a number of substantial developments, like the European Awareness System (EAS) which is a platform allowing TSOs to exchange operational information in real time, enabling them to react immediately in case of unusual system condition. The TSOs are therefore well prepared in order to coordinate and manage such events and limit the consequences. This preparedness and a permanent observation of the system frequency allowed to resynchronize the two separated areas in a very short period of time.

How are countermeasures coordinated in Continental Europe in case of frequency deviations?

In Continental Europe, procedures are in place to avoid system disturbances and especially large frequency deviations with the risk of uncoordinated disconnection of customers or generation. The TSOs Amprion (Germany) and Swissgrid (Switzerland) are responsible for these procedures in their role as synchronous area monitor (SAM) in Continental Europe. The SAM continuously monitors the system frequency. In case of large frequency deviations, they inform all TSOs via the European Awareness System (EAS) and launch an extraordinary procedure for frequency deviations to coordinate countermeasures in a fast and effective manner in order to stabilize the system. One step of this procedure is a telephone conference by Amprion, Swissgrid, RTE (France), Terna (Italy) and REE (Spain). This teleconference took place at 14:09 CET on 8 January 2021. In the telephone conference, the situation was evaluated, the TSOs informed about countermeasures which were already activated. The TSOs of the North-West and South-East Area also coordinated the actions for reconnection in order to reach one synchronous area in Continental Europe again.

Were end customers disconnected? Were there any other consequences?

Customers in the order of 70 MW in the North-East Area and in the order of 163 MW in the South-East Area were disconnected. Due to the high resilience of the interconnected network and the rapid response of European TSOs, the security of operation and electricity supply was not endangered further. An important contribution to stabilizing the system was delivered by the previously contracted interruptible services, which were activated in France and Italy. Such contracts which have been agreed with customers allow the TSO to temporarily and automatically reduce the electrical consumption depending on the situation with the electric power system in real-time.

What is an electrical busbar?

Are there special devices protecting the equipment in a substation?

Various devices protect the equipment in a substation. One of them is an overcurrent protection relay, disconnecting automatically the equipment (Eg. overhead line or cable) if the electrical current becomes so high that it can cause damage to the equipment. A current which is higher than the material out of which the equipment is rated for (Eg. aluminium wrapped around a steel carrier rope) will cause mechanical damage and can also endanger people and other assets, if for instance a damaged overhead line drops on the ground without being disconnected. Another type of protection are distance protection relays, which measure a combination of current and voltage in time and act in a selective way to protect equipment depending on the distance of the failure from the equipment.

What next steps are foreseen for the investigation?

According to the Article 15 of the Commission Regulation (EU) 2017/1485, for a Scale 2 event such as the one of 08 January 2021, an Expert Investigation Panel shall be set up composed of TSO experts, to which also National Regulatory Authorities and ACER are invited. The Expert Investigation Panel will produce a report which describes in detail the sequence of events, root causes and – if applicable – necessary actions to contribute to preventing similar events in the future. The next steps, timeline and final publishing dates, as well as all other relevant information, will be published on the ENTSO-E website.